Guest Blog: From Engineering to Pursuing a Horticulture Career

My name is Andrew Ernat, and I am a 19-year-old who came from a family farm in Northwest Missouri. Currently, I am a student at Iowa State University pursuing degrees in horticulture and global resource systems with a minor in Spanish. I have just finished my freshman year and am currently interning in the seed technology department of Ball Horticultural Company in West Chicago.

For anyone whom I have met in the last 6 months, my story of becoming a future landscape professional may seem quite linear. However, this is far from the truth.

Less than one year ago, I parted ways with my small hometown to become a Cyclone.

This surprised many; the last graduate from my hometown to attend Iowa State enrolled over a decade ago.

Naturally, I was nervous about living so independently from all I had known but was eager to follow a new pathway. In my mind, that pathway began and ended in mechanical engineering, a marriage between my mother and father’s professions of math and mechanics.

I was confident to a fault. There were many moments in engineering that made me question my calling, but I brushed off these inklings until I was presented with a more serious topic for consideration: my first internship offer. This came from a large construction engineering firm that would make my resume shine in the eyes of future employers. However, I found myself unable to be genuinely excited.

This all happened so fast, and I am lucky to have caught myself before being sucked into a career path I was not meant for. After much thought, I turned down the internship.

My heart had told me I was meant to give back to the Earth through a career in agriculture. Coincidentally, I was enrolled in one of the top agricultural universities in the nation. However, I needed to pinpoint a field of study.

In high school, I enjoyed my time in FFA and had found success in several career development events, most notably in 2017 when I became a national champion in the nursery and landscape event. I had failed to notice how natural the information came to me. 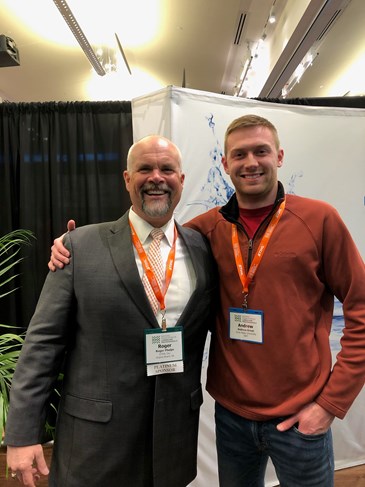 Upon claiming the title, I was offered a unique opportunity that, looking back, contributed largely to my recent change of plans. Stihl Corporation, with the one and only Roger Phelps as an ambassador, flew my team and I to the National
Collegiate Landscape Competition. This NALP event aimed to empower the next generation of landscape professionals.

When going through that tough time of changing my career plans, I recalled the enthusiasm, dedication, and hard-working mentality of the people at NCLC. I decided to join the community through horticulture. Every day I am proud of where I have found myself. This decision came just in time to make the trip to NCLC again, now as a member of the Iowa State team.

Being able to revisit Roger and many other friends I had made just one year ago was one of the most gratifying memories I have made. Had I not been able to see the industry in action, I would have likely been unable to convince myself of such a large change. I want to genuinely thank Stihl, the entire NALP staff and so many others for giving me these crucial opportunities that have led me to pursue a future horticulture career.

Interested in finding your own path forward in the landscape industry? Learn more about potential career pathways that may interest you, including educational requirements and salary ranges.